The Guide to Backup Tape Rotation and Vaulting Schemes

Among all the various methods and formats, tape backups stand alone as one of the most cost-efficient and long-lasting options for backing up data.

Learn more in this video or the transcript below about what a backup tape rotation and vaulting scheme is, its benefits, the different kinds of tape, and most importantly the individual types of tape rotation schemes such as first in, first out, grandfather-father-son, and the Tower of Hanoi. 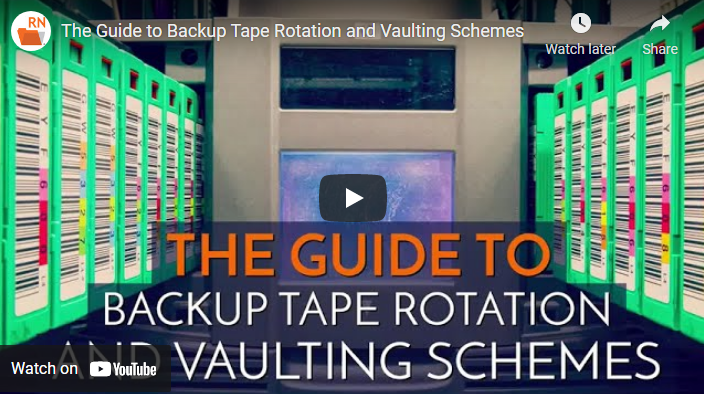 What Is a Backup Tape Rotation & Vaulting Scheme

Tape rotation and vaulting schemes are a strategy for backing up data to tapes in order to minimize the amount of media needed by reusing past tapes for future backups.

Even though with all schemes the actual data that’s backed up is the same, over time different rotation and vaulting schemes have been developed to strike a better balance between cost and retention requirements.

There are 3 simple benefits from using tape backups that still make them a useful tool for modern records management: 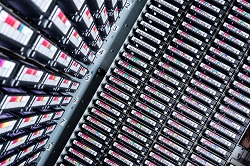 There are 3 main backup tape rotation and vaulting schemes, and determining which is best is based on your own storage and retention needs.

The primary rotation and vaulting approaches include:

During a First In, First Out (FIFO) backup scheme the newest or most recently modified files are saved on the oldest tape in the set. In other words, the tape that contains the least useful previous data is overwritten.

When using a FIFO backup system, the backup depth goes as far back as the number of tapes being used.

For example, if 14 tapes are being used for daily backups, then the past 14 days of data will be available.

Grandfather–Father–Son (GFS) backups are a common rotation scheme for backup tapes where there are three or more backup cycles being used such as daily, weekly, and monthly.

Just like with general FIFO rotation schemes, the daily, weekly, and monthly backup tapes are rotated using a first in, first out system.

The Tower of Hanoi method is more complex tape rotation strategy that’s based on the mathematical puzzle invented by the French mathematician Edward Lucas in 1883.

In terms of backups and tape rotation, the Tower of Hanoi scheme a cycle of exponential retention periods with a recursive pattern for scheduling tape backups as opposed to using a large number of tapes that need to be backed up daily.

The Tower of Hanoi can function on as few as four tapes, where:

Using this system as an example, data from up to 8 days before it can be restored despite the fact that only 4 tapes are used, and continuing the exponential pattern, if a 5-tape Tower of Hanoi was used, then data from up to 16 days will be available.

Join Kroger, NASA, Netflix, and the countless other businesses and organizations that we’ve helped to find and implement the ideal backup tape rotation and vaulting scheme when you visit us at Record Nations. For free no-obligation quotes, fill out the form to the right, use the live chat button, or give us a call at (866) 385-3706.